Games like Wordle – the best variants for daily play

There's no better start to the morning than playing the latest Wordle with a cup of coffee in your hand. Ten minutes of puzzling and then you're off into the day. But don't you want to try something new? Some clever minds have taken Wordle to a new level and have come up with some really interesting word games - some are a lot of fun and others are guaranteed a to make your head hurt. But first things first ...

Quordle, Octordle, Squardle, Nerdle, Heardle - and no end in sight

First of all, it should be said that all game variants are based on the trending word game Wordle. Some variants are very close to the original, like Quordle and Octordle, other variants, like Nerdle or Heardle, are based on numbers or music instead of letters. We have tested the latest variants and would like to present them to you. But get ready: we are sure that new game variants will keep arising.

If you enjoy Wordle, you will have a lot of fun with Quordle. Quordle is like Wordle, only quadrupled. The game principle is basically the same - but instead of guessing one solution word within six tries, you have to guess four 5-letter words within nine tries. The colors green, yellow and gray indicate how close you are to the solution word. The special thing is: if you enter a suggested solution, it appears in all four squares. So don’t use too many attempts for one solution word. As with the original Wordle, our Wordle Solver can help you here. Of course, it is much more cumbersome, because you may have to restart the Wordle Solver again and again, because it can't process all the information. Be sure to keep an eye on the keyboard at the bottom while playing - there you can see which letters you haven't used in any of the squares yet. 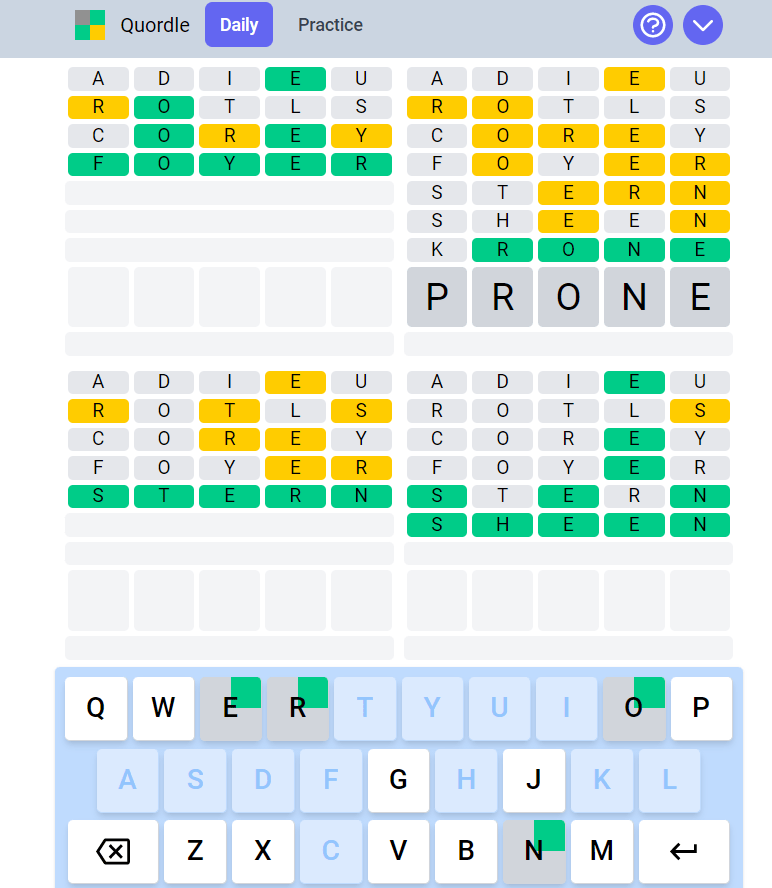 You thought Quordle was difficult? Then check out Octordle!!! This is another spin-off of the New York Times classic! In this version of the game, you must simultaneously find eight 5-letter solution words within thirteen tries. As in the original, the green, yellow and gray boxes show you the distribution of the letters. Similar to Quordle, please note that a solution attempt appears in all eight grids at the same time! So you should keep in mind that you don't waste too many attempts for a solution. It's best to start with three words that contain the most common letters and as many different letters as possible, including all vowels - so in the best case you'll have checked fifteen letters in three attempts. Our tip: DUMBO - NASTY - LIVER. Octordle requires a high level of concentration and multitasking skills.

Even if Octordle seems unsolvable at the beginning, we can say from our own experience that it is absolutely addictive!

Where:
You can play Octordle here: https://octordle.com/

There are two versions - Either The daily Octordle or the free play, where you can play as often as you like.

Tip:
For a better overview choose the widescreen mode.

Squardle takes the Wordle cosmos to a whole new level and is probably the most challenging Wordle variant. Inventor Pelle, the head of Fubar Games, a game designer from Sweden, had the idea to translate Wordle into a 2D version for quite some time. Squardle is similar in its structure to a classic crossword puzzle and means translated "squared wordle". The rules of Squardle are very complex - and - to be honest - rather overwhelming at the beginning. But once you have played Squardle for the first time and understood the new colors and clues, Squardle is a real enrichment for every wordpuzzle lover. For a successful start we have summarized the rules for you:

So, unlike the original, Squardle gives you lots of extra information to combine during the game. This can be quite challenging! However, if you overcome this challenge, you will love Squardle for its complexity!!!

Where:
You can play Squardle here: https://fubargames.se/squardle/
Tip:
Watch a Youtube video on how to play Squardle first - it will help 😉! 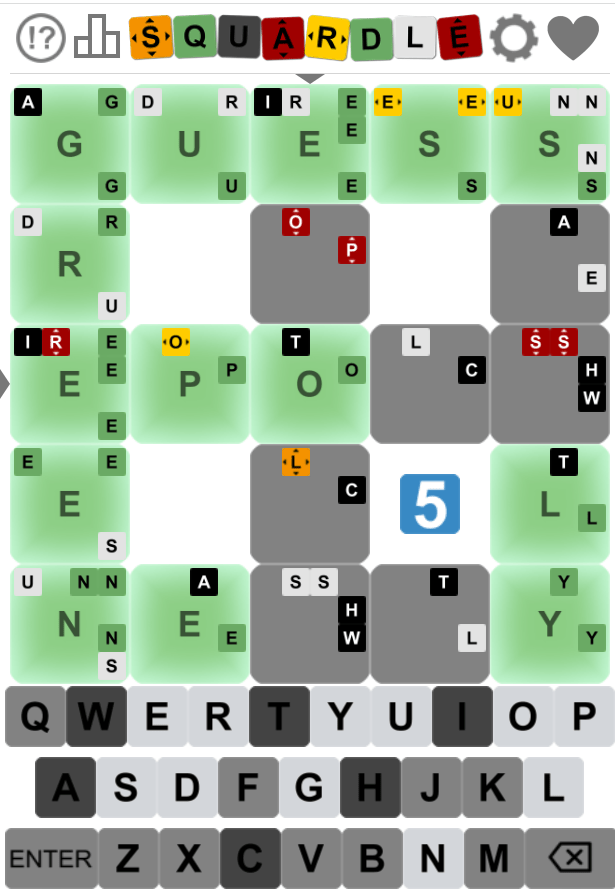 Are you more of a numbers person? Wordle - Quordle - Squardle are too easy for you and you want a "real" challenge? Then there is now the ultimate number puzzle for you: Nerdle! As the name suggests, the number quiz mainly appeals to math nerds. The structure is similar to Wordle with some differences:

Sounds simple? Well, if you're a math nerd maybe 😉.

Where:
You can play Nerdle here: https://nerdlegame.com/
Tip:
Strong nerves! 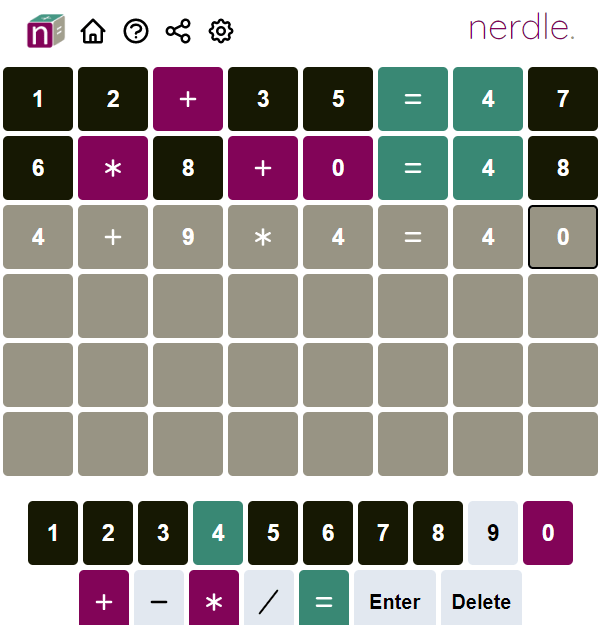 That were too many words and/or letters for you so far? Are you more of a musical type of person? Then try Heardle! The rules are simple:

Where:
You can play Heardle here: https://www.heardle.app/
Tip:
Even if you don't have a plan, just enter a starting letter in the search bar and some musicians will already be suggested to you. Maybe you'll be lucky and choose the right one 😉. 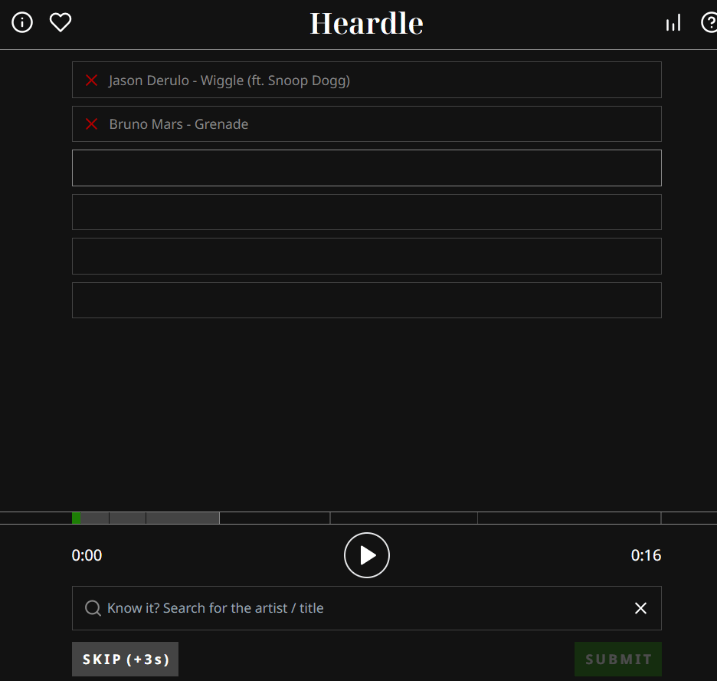 We have now introduced you to some spin-offs and further developments of the word guessing game Wordle. They are really worth playing and just as entertaining as the original, others really test your patience and require your full attention. And be sure - there are many more variations of the classic word puzzle. So if you are not into anything with letters, numbers or music, give it a try to one of the following games:

These are by far not all Wordle variants, as you can see there is a guessing game for every taste!